How to play the Starburst slot

Starburst is one of THE most popular online slot machines in recent years. The concept that lies behind it is very simple. Over consuming and complicated bonus games and free spins are broadly done away with, with a lot of value placed on a simple but extremely exciting gaming experience. Indeed just this simple concept scores perfectly with users. It is perfectly suited for fast use to spend a few minutes with the game in a spare moment, or even to quickly try your luck by mobile phone or tablet.

How to play the Starburst slot machine?

The game play is easily explained. This is a fairly typical online slot machine, five-reels, ten pay lines. The bet per line can be variably adjusted between one cent and ten Euros. Once this is done, the game is simply started by the green button in the middle lower part.

The symbols in Starburst are partly slot machines classic symbols, such as the 7 or the bar symbol. The rest are different coloured crystals, the value from high to low as follows: yellow, green, red, blue, violet.

As wins on Starburst can be made from both sides, excitement is guaranteed. From three equal symbols which are adjacent from left to right, or up and from right to left on one of the ten winning lines, a win has been made. 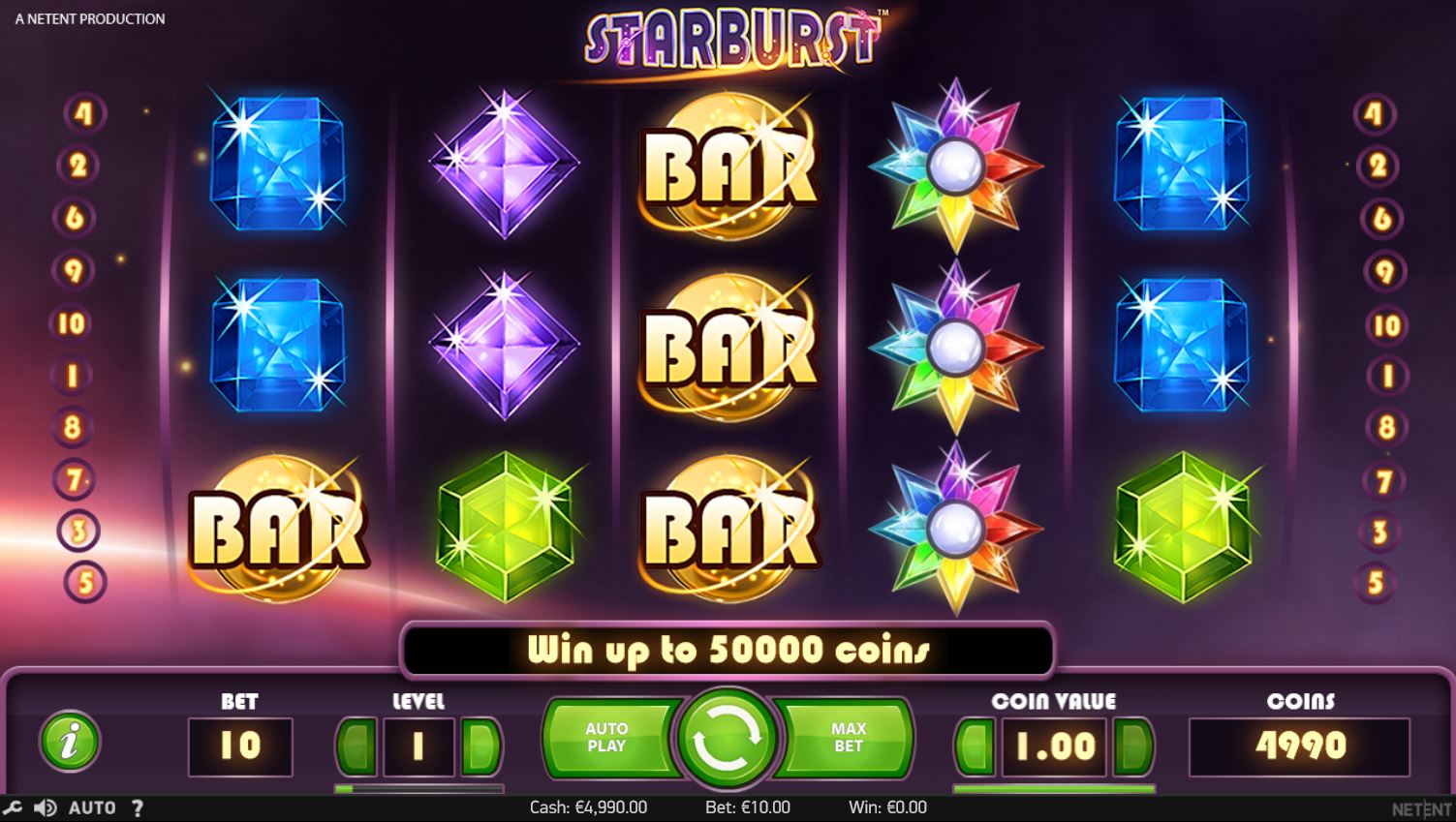 On the rollers two three and four can fully emerge with rainbow coloured crystals on a roll - the so-called Starburst Wild symbols. This always includes the entire roll symbol that substitutes any other symbol and can be used to complete winning combinations. The players in his rotation receive one of these Starburst Wild rolls, so first a win is determined, then fixed, then roller carries out a free extra spin. If again a Starburst Wild symbol rolls up, so this is done again. Bringing these Wild symbols on two, three and four reels is possible, and thus the wins from the left but also from the right are paid so incredibly high winning combinations are possible! Considering that five Bar symbols next to each other pay out two hundred and fifty times the bet, and this can occur in an absolutely perfect case on ten pay lines, a win of up to 2,500 times the stake is possible.

Free games? Bonus Round? Not with Starburst

In order to ensure the simple game play, but also the flow of the game to maintain, and to enable fun games in between, Starburst dispenses with special free spins or bonus rounds. The player doesn’t have to do without free games altogether. Many casino providers have realized how popular Starburst is online as a slot machine, and offer a sign up bonus or to specific bonuses often as free spins for this slot. To summarize, the combination of all these points makes Starburst the perfect online slot machine for beginners and novices, but also for the fast-paced game in between. We wish you all the best and good luck, may the stars burst for you!