Divine Fortune is Netent's latest jackpot slot machine and takes players to the world of ancient Greece. In addition to playing a special Wild feature, the slot also offers three different jackpots, varying in amount depending on the game.

Divine Fortune is a classic-looking game with five reels and twenty fixed  winning lines. The developer has a wide range of features to ensure an exciting and varied game experience. Surprisingly, there are only eight different symbols at Divine Fortune that can lead to a win. These are, rather than the card symbols used in many slot machines from J to A, these are more like a triangle, eagle, bull, lion or medusa.

During the main game the maximum profit is 30 times the selected bet, triggered by five Medusas appearing on a winning line. The bets can be freely chosen between 20 cents and 100 Euros, as usual with NetEnt, by the adjustment of coin value and value of stake. 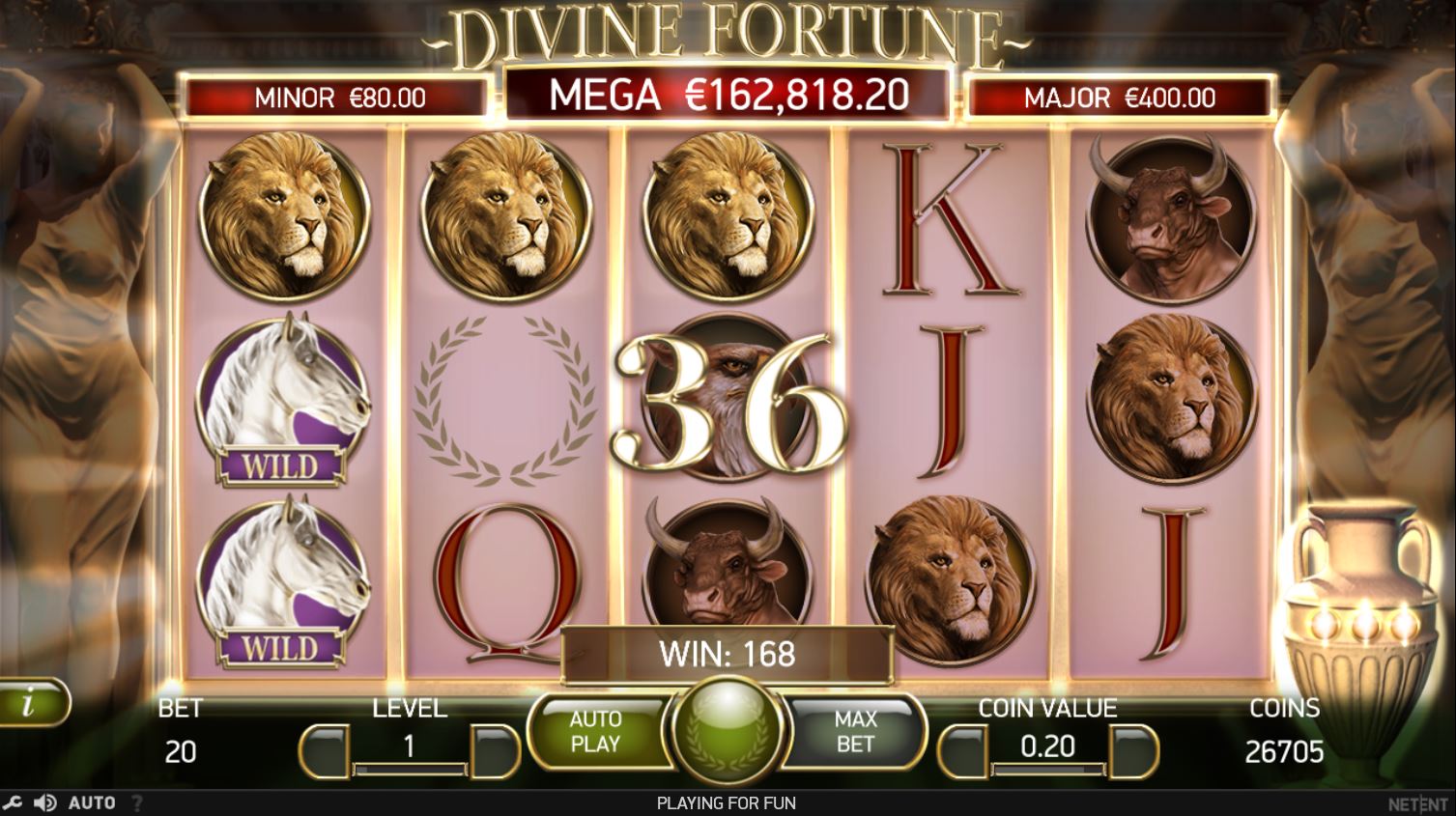 The wild symbol in this slot is represented by the legendary horse Pegasus and replaces, apart from the Scatter symbol and the bonus coin, all other symbols. If at least one wild symbol appears somewhere on the screen, then a wild feature is triggered by Netent. During this, a free roll is started, in which the wild symbol slides down a field. Free turns are played until the last wild symbol has disappeared from the screen.

If one of the free spins lands another Pegasus on an already existing one, the Wild-on-Wild feature will be added and the Pegasus will be expanded to the whole reel.

If three or more Scatter symbols appear anywhere on the screen, this means that you’ve won the game. The number of example symbols decides on the number of free turns. Thus, either 5 (with three scatters), 8 (with four scatters) or 12 (with five scatters) are generated. 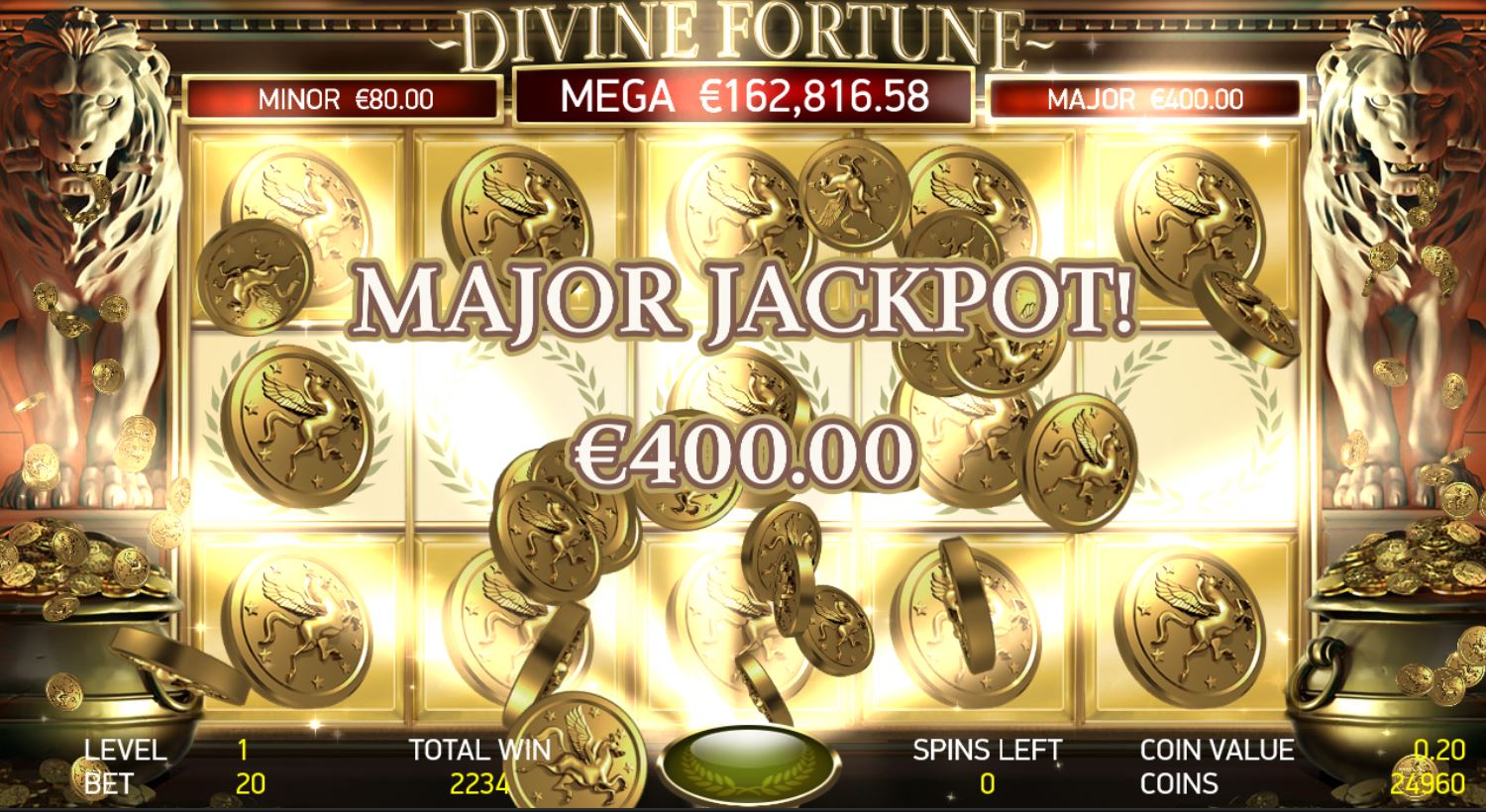 There are three of them. The two smaller jackpots, known as Minor and Major, change depending on how high the chosen bet is. The multiplier, however, always remains the same, which is why:

One of the jackpots can be won if the bonus feature is triggered. This is done by collecting three coins in the main game. These must be collected during a single spin, which is mainly possible during a wild feature.

At least three collected coins trigger it and lead to a kind of mini-game with a new screen. The collected coins are randomly distributed on the empty rolls and at the same time each give a bonus between half and ten times the bet.

At the beginning of the feature three free turns are available, during which as many more coins as possible should appear on the rolls. Each coin that emerges gives a further win and resets the round counter to three. The aim here is to obtain one or more full rows with coins. The bonus feature ends when there are three spins with no new coin appearing.

If, at the end of the bonus, a row is complete, the Minor jackpot is won, with two rows the player gets the Major Jackpot and if a full picture appears showing coins, then the Mega Jackpot and thus a total of several thousand Euros is collected.